A day on the weekend with one big pack together

admin
It’s been just over 5 weeks now since the shelter dogs moved in and Lucy had her pups at the farm. In that time, there’s been hundreds of hours of training to get here. The puppies have grown and want to be part of the pack too, barking and crying when they hear the dogs go out for their run. Take me too, they say!

Freddo has limber tail from too much play with his best mate YoYo, nothing serious and nothing some rest won’t fix. Our boy Wal used to get it all the time from too much swimming and generally just being too happy. That’s why it’s also called ‘happy tail’. Of all the things to have Freddo, how nice to be suffering from being too happy after all you’ve been through.

Another health update for the pack is for Bobby. Last week we took Bobby in for a full health check at the vet. Together there’s been a lot of concern for Bobby. Be it his hearing, his spine and hips or even his general physical awkwardness and mental ability.

After a full day at the vet having X-rays and scans we were given the results. Bobby does not have hearing loss but has a suspected mild case of Spina Bifida (hence the ridge in his coat), nothing wrong with his skeletal system but a neurological issue with his spinal cord. It would have been a deformity at birth.

It does cause pain. He will have been in pain all his life. Until now. This last week he has been trialled on pain killers especially for his neurological condition. And the verdict … it seems to be working. Bobby is more active than ever. He is now joining the pack on the runs and he’s generally less grumpy.

It has been a difficult road for Bobby and it’s been hard to think about him living quietly in pain. But we’re trying to look at the positive. He doesn’t have to live the rest of his life in pain. And that’s a BIG positive!

Behind the scenes, both Bobby and Conrad have had very good progress in finding their forever homes. Meetings, training sessions, home visits with some very special people who really love and care for them already. Lots of good news and we will tell you all about it in the coming weeks when it’s all final. We are allowing this process to take as long as it needs to take, for everyone’s benefit; dog and owner.

Which just leaves Freddo left to find his forever home, but until then he will enjoy farm life with us. We don’t think Freddo thinks that’s so bad.

It won’t be long now until we start training the puppies. We’ve already started with early socialisation. The three of them are so very different. The smallest of the litter is by far the most confident and brave of the pack. Nothing fazes her and she loves to venture away with the big doggies already. I think she’s more brazen than Cutie Pie! And that’s really saying something because we all know how confident Cutie Pie is.

And confidence is right up there for us. We see so many dogs with anxiety related issues these days and so this early exposure period is going to be very important for us to give these puppies the best start in what will hopefully be a wonderful life with someone very special.

The other little girl who was born the biggest is the most timid. She is very sweet and takes refuge under a human from the pack. We will gently be working on this in particular for her. She’s in the best place for building confidence through socialisation. There’s some big beautiful friendly packs just waiting to meet you and help you through that.

The little boy is a real sweetheart and more laid back than his little sister. He loves the kids and dear Cutie Pie. Not the most confident nor the most shy of the 3, he’s somewhere in the middle.

They’re all doing very well, Lucy is a brilliant mum. Lucy herself is doing very well. She has started her training and socialisation too now. She’s a beautiful girl who is always smiling, and if you’re very lucky you’ll get her very special teethy grin. It only comes out when she’s super happy and excited. Our girl Tilly has been roughed up a couple of times by Lucy. Tilly is a bit of an old matriarch now so Lucy had honed in on her during her early introductions to our own pack. But Lukes worked on that in her training and it is now a thing of the past. Well done Lucy!

And I think that’s about it for now with updates.

Hope you’re all enjoying your weekend too ????

A day on the weekend with one big pack together 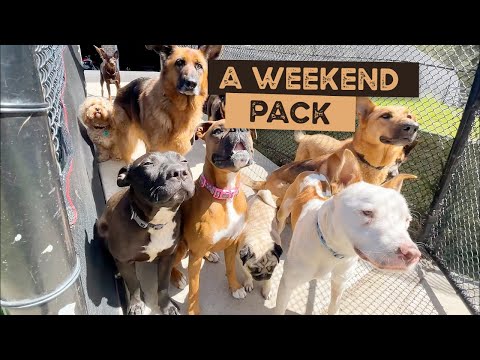 It’s been just over 5 weeks now since the shelter dogs moved in and Lucy had her pups at the farm. In that time, there’s been hundreds of hours of tra...