admin
Jupiter the Cavapoo has now returned home after his 3 weeks residential training.

Jupiter is a very excitable pup which is lovely to see how much he loves to be happy, but this also involves a lot of behaviours like excessive barking, whining and jumping. His owner was keen to get more control of this behaviour so Jupiter could have more control of his emotions and not explode in excitement every time something mildly exciting happens. Jupiter has done well with this and even though he is still on a journey to continue learning more about calmness, he can now switch off from these behaviours quickly and focus back into training instead of going mad with barking.

Jupiter has also worked really hard on his lead walking during his stay. He has done really well with this and loves offering eye contact when walking to heel. Jupiter lives in London so this was very important to his owner.

He has also practiced lots of recall whilst with his trainer. He had great recall when nothing was around, but around distractions he would often struggle. Jupiter can now recall from all sorts of distractions and even resist temptation of food. He has also found his love for the emergency stop, which has massively improved his focus when off lead and he now checks in for flying food often!

Lastly, Jupiter has worked lots on his settling skills so he can join his mum at cafes and also at the office as well as stay calm when people come over. 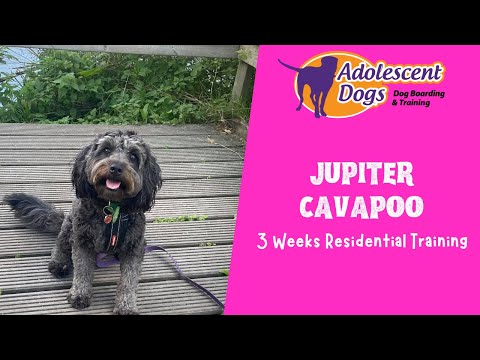 Jupiter the Cavapoo has now returned home after his 3 weeks residential training. Jupiter is a very excitable pup which is lovely to see how much he l...